Wasn’t it just a few months ago that the federal government told us all about their new hands-off approach to marijuana enforcement in states where it had been deregulated? Well, if you remember correctly, it wasn’t entirely hands-off, so they decided to go ahead and put their hands back in it, raiding several marijuana dispensaries in Colorado this week.

More than a dozen medical dispensaries in Denver and several in Boulder and other towns were raided by law enforcement including the federal DEA. A spokesman for the agency says their raids are aligned with the memo sent out in August. That memo said that the feds wouldn’t get involved so long as the businesses complied with state laws and weren’t tied to one of these eight priorities:

For now, the feds aren’t saying which of these the raided dispensaries violated, merely that they did.

“Although we cannot at this time discuss the substance of this pending investigation,” wrote spokesperson Jeff Dorschner, “there are strong indications that more than one of the eight federal prosecution priorities identified in the Department of Justice’s August guidance memo are potentially implicated.” 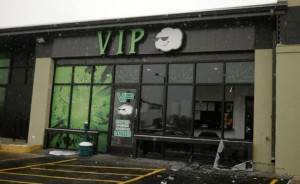 Lest we thought Colorado was the new frontier in marijuana laws, the federal government is here to put the hammer down. There’s likely no coincidence that the raids are occurring just six weeks before the recreational pot-shops are opened. More than likely, they believed this crack-down would serve as a warning to all of the budding entrepreneurs.

“The Justice Department said it would respect states’ rights to regulate marijuana, and that it would not go after businesses as long as they are complying with state laws,” said Mason Tvert of the Marijuana Policy Project. “We hope they are sticking to their word and not interfering with any state-regulated, law-abiding businesses.”

The bottom line is this: despite the new laws, you can still face arrest and prosecution for marijuana laws in the state of Colorado.

Even if you think you are following the rules.