A local news investigation found that from 2009 to this past summer, many cops who received tickets while on the clock were simply not paying. During that period, red light cameras and radar cameras doled out 607 tickets that would ultimately remain unpaid; 458 of those were for police vehicles. A new policy, however, will change that. 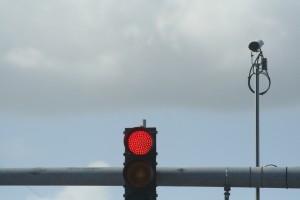 The Denver Post reports that police officers will now be required to pay their fines and will not face disciplinary action for their speeding and red light infractions. The change in policy is meant to keep cops on an even playing field with the people they serve and to foster a bit more trust from the community.

Prior to the change, cops didn’t have to pay the fine, but they would face departmental discipline. A first ticket would bring an oral reprimand and the second would warrant a written reprimand. Now, they will pay a ticket like everyone else.

Safety Manager Alex Martinez said it was only fair to remove the departmental discipline, as requiring the police to pay fines and face a reprimand would have caused additional friction within the department. And friction is something the department has enough  of already.

Police Chief Robert White has been changing people’s roles within the department, “shuffling the ranks of detectives, technicians, corporals, replacing some and moving others to different jobs.” Even rank-and-file officers had to reapply for their jobs. To pile on additional sanctions for speeding would have likely ruffled even more feathers.

Commanders will still be notified when a cop is ticketed. The Conduct Review Office will then determine if the violation happened while responding to an emergency. If so, the officer won’t face discipline or have to pay the ticket.

A third ticket will warrant an oral reprimand in addition to the fine. A fourth offense will result in a written reprimand. Finally, a fifth ticket could result in the officer being docked 8 hours from their paycheck.

Police officers should be held to the same standards as everyone else. If we are required to follow the laws, so too should they. This includes the little things, like speeding tickets, and the bigger things as well.

When you are accused of a crime, whether it’s a DUI or a drug charge, you want to know you’ll be treated fairly, not be treated according to who you are, what you look like, or how much money you have. A local criminal defense lawyer can help make sure your rights are protected and that you receive fair treatment under the law. Contact our offices today to discuss your charges and how we might be able to help.